There’s great news for everyone searching for their American WWI military ancestors.  To commemorate the 100th anniversary of the entry of the United States into World War I, Ancestry just released U.S., Army Transport Lists 1910-1939.

Why is this important to you?

These Troop Passenger Lists document the movement of Americans and ships going to and from Europe during WWI, and beyond. The records include details that might not be accessible or available to researchers including:

Let’s take a look at an example of an index record for George Allen Rhodes, a departing soldier on his way to France: 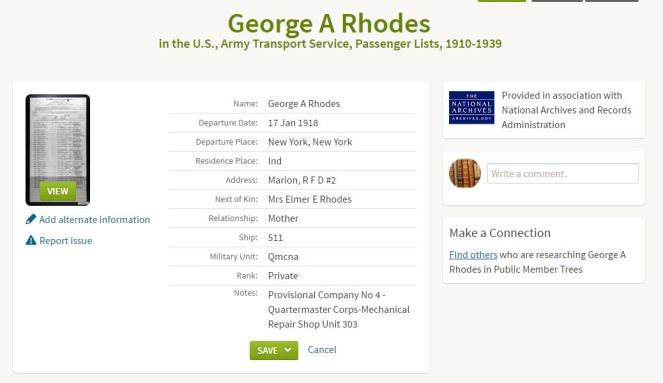 And let’s compare it’s arrival record from France back to the US:

What can you see from these two records?

Apart from the solid arrival dates and locations, the biggest chunks of information cover his change of unit information listed in the ‘Notes’ field.  George Rhodes’ service is listed as Provisional Company No. 4 – Quartermaster Corps – Mechanical Repair Shop Unit 303.  In his arrival record back to the US, George is listed as Group “A” Repair Unit 303 Motor Transport Corps, which is the same information found in other sources.

Why does this change make a difference?  The earlier unit information is going to be helpful when I go to National Archives 2 in College Park, Maryland in a few weeks to conduct research.  I can request this unit information, which I have never seen, and browse through the records to hopefully find out more about George’s time in the service.

If you’re looking for help with your research, the Fountaindale Public Library is hosting a free webinar and workshop entitled Here Come the Doughboys! – Tracing Your WWI Military Ancestors on Saturday, September 23, 2017 from 9:30 am to 3:30 p.m. CST.  This live stream event will be available as a recording after the event to help aid you in your research.  Downloads and the recording will be available at fountaindalegenealogy.org/webinars.

Here Come the Doughboys! – Tracing Your WWI Military Ancestors is part of World War I and America, a two-year national initiative of The Library of America presented in partnership with The Gilder Lehrman Institute of American History, the National World War I Museum and Memorial, and other organizations, with generous support from The National Endowment for the Humanities.

See you at the Library!
Debra

This blog has moved to fountaindale.org/blog and is no longer active on this website. Check us out at our new home!