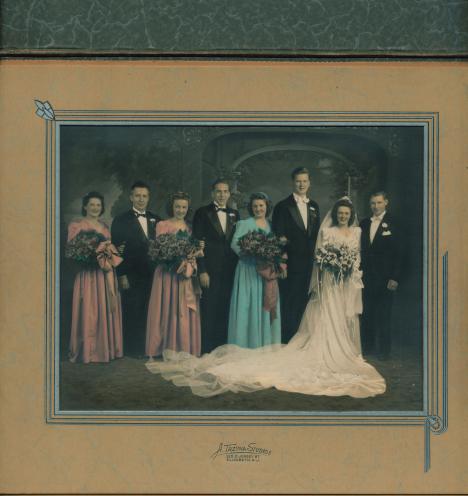 In the decades before the age of smart phones and digital cameras, most people took photographs with cameras that used photographic film. The images were then usually sent to a lab where the film was processed and the images were printed on photographic paper. This is how most families documented their lives, in particular, special occasions like weddings, birthdays, and anniversaries.

As people live longer, the oldest members of many families, often grandparents and older aunts and uncles, leave these treasured images to the younger generations.
In many cases, the pictures, sometimes mounted in albums or ornate folders (like the one above), get put away in closets, attics, and basements because the family members who receive the pictures really don’t know what to do with them.

This year, I joined the ranks of those who received family photographs. In my case, the photographs came to me from an elderly aunt after her death. There were dozens and dozens … most of them in black & white…some color…and a few gems in black and white that were carefully color-tinted by hand. The sizes ranged from wallet sized snapshots to formally posed large wedding portraits.

Studio 300, at our Fountaindale Library, has a very workable solution that will make it possible for you to preserve the priceless images that have been passed on to you.
The Studio offers a class called “Scan to DVD.” It will show you how to digitize and save your photographs.

I attended a session of the Scan to DVD class that was held on September 21. I learned a lot. Since the class was only an hour in length, it was a demonstration class, rather than a hands on session. The knowledgeable staff member showed the class the basics needed to come to the Studio and start working on their scanning project.

The instructor showed those attending how to use a specialized Epson photo scanner that can be used to digitize your family photographs, slides, and even negative film. She also showed us another type of flatbed scanner that is available in the Studio that is good for larger size photographs that may be in folders or albums.

The class also covered the basics of using the Epson scanner software and programs like Apple’s Photos. A nice feature of Photos is the ease with which you can create a slide show of your scanned images. Very impressive results and not too hard to do.

The software that I mentioned above will help you make some adjustments to your scanned images. Should you need more, the Studio can also help you with other classes it offers like “Photoshop 101” that is coming up in mid-October and “Photoshop: Photo Restoration,” that will be offered in October as well.

The first of the two photographs that I included, shown above, shows the original picture of my aunt and uncle and their wedding party. It was taken at a photo studio, in the 1940s.

You can see part of the folder in which the picture was placed. The second photo, shown below, was cropped and enhanced a little. Some issues with spotting were also corrected. These things were done in Photoshop and the resulting image shows some of the things that can be done with this software.

If you are also working on family history and genealogy, having the ability to connect a name with an image of a relative is a powerful reason to want to start working on preserving photographs of family members.

Studio 300 and its staff are a fabulous resource for this type of project. I now have a solution to how I can save the photographs I inherited. I can now also make them available to other members of my family in a usable format.

This blog has moved to fountaindale.org/blog and is no longer active on this website. Check us out at our new home!